Education is that which remains, if one has forgotten everything one learned in school.
From an unknown thinker quoted by Albert Einstein, Out of my Later Years (1950)

In 1950, Albert Einstein wrote –for Scientific American Magazine- an account about extension of the General Theory of Relativity against its historical and philosophical background. He clearly defined it as a mathematical investigation concerning the foundations of field physics.
Beyond serious and attentive discourse that apply on the study of physical forces and qualities, a teacher, a student or a research worker may be find some educative conceptual keys and suggestions to the problem of global teaching and learning, allow themselves strangely enough be teaching the scientific method with creative acts, and to incorporate the Einstein's ideas in theirs systems of pedagogy.

In this way, may asymptotically (using the idea of limits in calculus) approach the knowledge, but with no the tendency to express strongly held opinions in a way that suggests they should be accepted without question. We will never fully reach the truth or the knowledge, and yet forever the 'opportunity of exchange error for truth' (John Stuart Mill, On Liberty, 1859).
Now a question arose: What conceptual keys would be found through Einstein's account? The question has a 'punctual' answer: Nothing for granted, Enjoy 'comprehending' and to ask questions like children, Passion, Muse (be absorbed in thought) and hypothesis, Creative act, Affirmation or Refutation.
Nothing for granted (non-dogmatic)
Similar to an exploratory stage, Einstein explained,

Some readers may be puzzled: Didn't we learn all about the foundations of physics when we were still at school? The answer is 'yes' or 'no,' depending on the interpretation. We have become acquainted with concepts and general relations that enable us to comprehend an immense range of experiences and make them accessible to mathematical treatment. In a certain sense these concepts and relations are probably even final. This is true, for example, of the laws of light refraction, of the relations of classical thermodynamics as far as it is based on the concepts of pressure, volume, temperature, heat and work, and of the hypothesis of the non-existence of a perpetual motion machine.

Enjoy 'comprehending' and to ask questions like children
Comprehend the sheer scale of the problems should be always enjoyable, a pleasing intellectual curiosity that permit to children question himself to engage in a process of thinking and discovery. In the same manner, students may begin to pose some initial conjectures, about problem-posing and its process of dissecting.


What, then, impels us to devise theory after theory? Why do we devise theories at all? The answer to the latter question is simply: Because we enjoy 'comprehending,' i.e., reducing phenomena by the process of logic to something already known or (apparently) evident. New theories are first of all necessary when we encounter new facts which cannot be 'explained' by existing theories. But this motivation for setting up new theories is, so to speak, trivial, imposed from without. There is another, more subtle motive of no less importance. This is the striving toward unification and simplification of the premises of the theory as a whole (i.e., Mach's principle of economy, interpreted as a logical principle).


Passion
Understood in terms of an intense enthusiasm, deal with a strong liking for to know that one not forming part of somebody's knowledge or of knowledge in general.

Muse and hypothesis
Ever phenomena must be to think in a deep and serious or dreamy and abstracted way, beginning from a tentative explanation for it (hypothesis).

But when, in the second half of the 19th century, the laws of electrodynamics became known, it turned out that these laws could not be satisfactorily incorporated into the Newtonian system. It is fascinating to muse: Would Faraday have discovered the law of electromagnetic induction if he had received a regular college education? Unencumbered by the traditional way of thinking, he felt that the introduction of the 'field' as an independent element of reality helped him to coordinate the experimental facts. It was Maxwell who fully comprehended the significance of the field concept; he made the fundamental discovery that the laws of electrodynamics found their natural expression in the differential equations for the electric and magnetic fields. These equations implied the existence of waves, whose properties corresponded to those of light as far as they were known at that time.

Creative act
There is no precise routine for to think straight to useful conclusions or at least no without creative thinking and sceptical thinking, and creation is fun, viz. bring back any memories, maybe, it’s no wrong the appreciation by American psychologist Howard Gardner: 'Perhaps imagination is only intelligence having fun’ (1982).

The theoretical idea (atomism in this case) does not arise apart from and independent of experience; nor can it be derived from experience by a purely logical procedure. It is produced by a creative act. Once a theoretical idea has been acquired, one does well to hold fast to it until it leads to an untenable conclusion.

Affirmation or Refutation (discerning what is and predicting what might be)
One of the most common mistakes in teaching is the act of affirming or refuting something known or assumed without reference to experience. Every logical standpoint or imaginary trials point must be demonstrated: or is true, or is wrong, e.g. General Theory of Relativity predicts the gravitational waves -by theoretical analysis- and scientists were investigating to detect directly the waves, until 2015 when three American physicists (Rainer Weiss, Barry Barish and Kip Thorne, who won the Nobel prize in physics 2017), made the first historic observation of the gravitational waves, ripples in the fabric of space-time that were anticipated by Einstein in 1916.

The skeptic will say: 'It may well be true that this system of equations is reasonable from a logical standpoint. But this does not prove that it corresponds to nature.' You are right, dear skeptic. Experience alone can decide on truth. Yet we have achieved something if we have succeeded in formulating a meaningful and precise question. Affirmation or refutation will not be easy, in spite of an abundance of known empirical facts. The derivation, from the equations, of conclusions which can be confronted with experience will require painstaking efforts and probably new mathematical methods.

In sum, these chosen Einstein's educative conceptual keys, in understandable terms, for teacher, student (these keys also strive to develop students' creativity, insight or discernment, and analytical skills) and people who hold a passion for science, helping to encounter to one way to solve the ever present problem 'how to do it', discerning what is and predicting what might be, to develop their investigative skills, and show how is necessary to shape a scientifically literate public.


Albert Einstein, 'On the Generalized Theory of Gravitation. An account of the newly published extension of the general theory of relativity against its historical and philosophical background', Scientific American, Inc, Volume 182, issue 4, pp. 13-17, April (1950).

Carl Sagan, The Demon-Haunted the World. Science as a Candle in the Dark, London, Headline Book Publisher (1997). 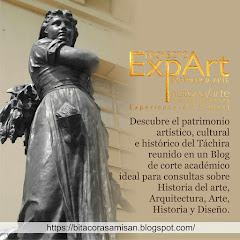 The Tachiran Country: We have never seen anything better... Think of Táchira and you'll conjure up images of industrious highlanders, mist, aromas of coffee, verdant landscapes, lonely Andes kettle lakes-rich in myths, folktales and legends, the birthplace of presidents, gold and black football/soccer team, the ox & plough and magnificent scenery. All of these are part of the fabric that makes up this unique land. Táchira lends itself to exploration in countless different ways, each an adventure of discovery rich in unforgettable experiences.

Proyecto Experiencia Arte - Experience-Art Project
Experience-Art Project/ExpArt Project [www.bitacorasamisan.blogspot.com] provides to students, teachers and people reading edublogs, contents, learning, and tools for popularizing knowledge, arts & culture appreciation (‘The best guarantee in the matter of the preservation of monuments and works of art derives from the respect and attachment of the peoples themselves,’ The Athens Charter, 1931, and Road Map for Arts Education, UNESCO, Lisbon, 2006), documenting the Past and Present with Essays in History/Art/Desing & Architecture. The Project has been developed by Samir A. Sánchez, Ph. D (Deusto University, Bilbao, Spain). Titular Professor of History of Art, History of Urbanism and Scientific Method, Catholic University of Táchira, San Cristóbal, Venezuela. Author of San Cristóbal Urbs Quadrata (2003) and Mors Memoriae o la Extinción de la Memoria(2011), and other books. Visiting Professor of MA in Architecture (City and Identity) of School of Architecture, National Experimental University of Táchira (San Cristóbal).

Translate this page to your language